My first Dalmatian I had when I was a child in England. Her name was Cindy. We got her after having seen the cartoon version of 101 Dalmatians and we simply had to have one. I know that is really the worst possible reason for getting a Dal but we were hooked and had Cindy for 13½ wonderful years. Cindy came out to South Africa from England when we emigrated. After Cindy passed away, the family got into Bearded Collies but I always wanted another Dalmatian and when I got married and had a home of my own, Sky came to live with us.

Sky (Dallmalli Crazy Sky) turned 14 in May 2002 ! She was a good natured dog, a little timid for the show ring, but neverthless, she turned out every year to support the Dalmatian Club's annual shows. My son Shaun always showed Sky in the junior handlers class. Sadly this year, 2002, it was time for Sky to cross the rainbow bridge as well. We miss her.

Rupert joined our family 10 years ago as a pup and he turned out to be a really wonderful dog. He has obtained his championship status in the Breed ring. He has appeared in 2 TV adverts and won an award for "Best Canine Actor" for one of them. He has also done 3 still adverts for magazines and an in store promotion for a local clothing chain. Rupert has done many promotions for the Dalmatian Club of South Africa as part of their education campaign for the general public around the release of the movie. He takes all these situations in his stride. He has also worked as a "canine collector" for the local SPCA and proudly wore his saddle in which he carried his collection tins.

Rupert recently went back into the show ring as a veteran and had two very good shows. He was judged Best Opposite Sex in Show at the Dalmatian Club Open Show 2000 and then a week later placed in the top 5 of the Veteran of the Year Competitionat Transvaal Midlands KC Championship show 2000. Just as I thought we would have a good year together, Rupert began behaving like a naughty puppy again and at the very next show we came 4th out of 4 ! That brought us down to earth with a bump ! Nevertheless we love him dearly. Below is picture of Rupert after the Veteran of the year Finals. 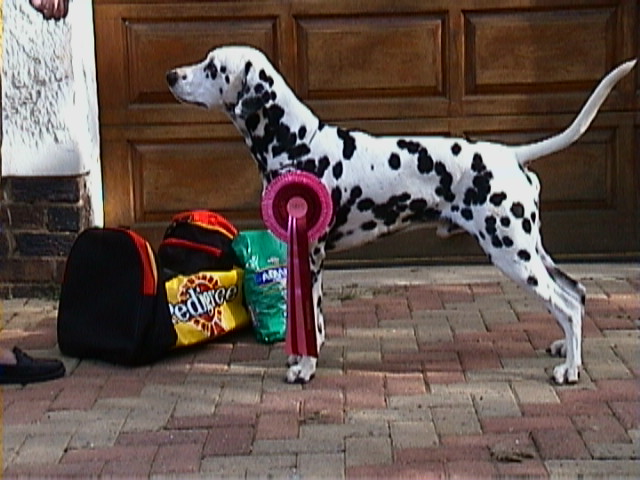 In 2001, Rupert won Best in Show, Best Veteran, Best Gait & Best Head at the Dalmatian Club Open show. He is pictured below with Maria, & Mary Kerfoot, the Judge. 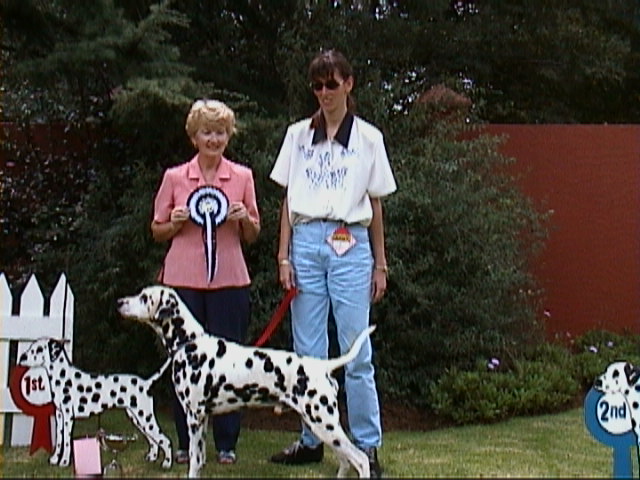 The Dalmatian Club of South Africa