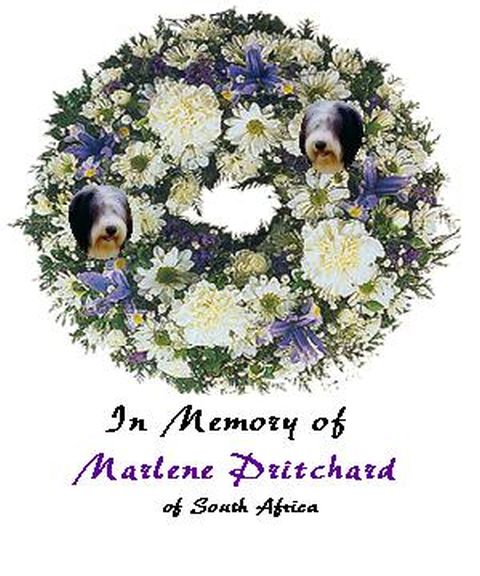 Tragically, Marlene was taken from us suddenly on 7 January 2000 as a result of a car accident.

My sister, Karen and I will do our best to keep the Westmilwunda Flag flying for Marlene.

Marlene will be missed by the entire South African dog show fraternity as well as other Beardie enthusiasts from around the world.

Marlene emigrated to South Africa from England in 1975 with her family. Dogs were always an important part of her life. In 1981 she acquired her first Bearded Collie soon to be followed by a litter sister, when asked to show the puppies by their breeder,  Marlene said she would give it a try.

The show bug had bitten and the two beardies were soon joined by Ch(SA) Barkly Moonraker (bred by Cathie Whittaker) who in his time was campaigned to Beardie of the year 5 times as well as numerous group placings and a couple of Best in Show wins. Barkly was joined by Misty (Ch(SA) Barkly Honeybee of Westmilwunda) during 1984 who also had group placings and a Best Puppy in Show to her credit. In 1989 Marlene imported her first Beardie Ch(SA,ZIM) Barkly Baroque of Westmilwunda (Ch Potterdale Privilege x Barkly Bo Jangles) Warwick was also to be Beardie of the Year serveal times as well as a finalist in the Dogmor Dog of the Year Competition. As a veteran Warwick gave Marlene the honour of winning Best in Show, Best Veteran in Show and Working and Herding Dog of the year – all on the same day, an achievement yet to be equaled!

Ch(SA,ZIM) Barkly Sunseeker of Westmilwunda (Potterdale Maestro at Mybeards  Ch Wllowmead a Star is Born) joined the beardie family next in 1991, at just two years of age went Best in Show at the Collie Club of South Africa champ show.    During 1999 he had the honour of winning the prestigious Olympic Veteran of the year title.    In January 1995 Chancy Ch(SA,ZIM) Sammara Touch of Puff of Westmilwunda arrived in whelp from the O'Briens (Ch Potterdale Conclusion x Ch Desbrough Destiny of Sammara) and to further add to the gene pool Marlene looked to the Czech Republic and brought in Ch(SA,ZIM) Sir Baxter Vanilka of Westmilwunda (Int Ch Natterjacks just Czeching  Caremella Brown Z Jelmaku)    The Latest addition arrived from Wales in 1998 from the Breaksea Kennels of the Burfitts - Ch Breaksea Hymns and Arias of Westmilwunda ( Potterdale Professional  Breaksea That's a Promise of Talhairan)

In 1997 a long standing dream of Marlene’s was achieved with the establishment of the Bearded Collie Club of Gauteng. The club had hosted grooming clinics, puppy clinics and agility functions to date. Marlene and the club were active in the rehoming of any beardie in need.   Since starting in Beardies twenty years ago Marlene has bred and shown some 22 Champions with several others close to championship status,.  Marlene achieved a lot for the betterment of the breed in South Africa over the last two decades.

Beardies filled her life, tragically cut short on Friday 7 January 2000 when she died in a car accident.

Beardies in South Africa have lost a true friend.

Ten years later, 7 January 2010, Maria and Karen planted a rose garden of remembrance for Marlene filled it with "Mothers Love" and "Puppy Love", and roses.